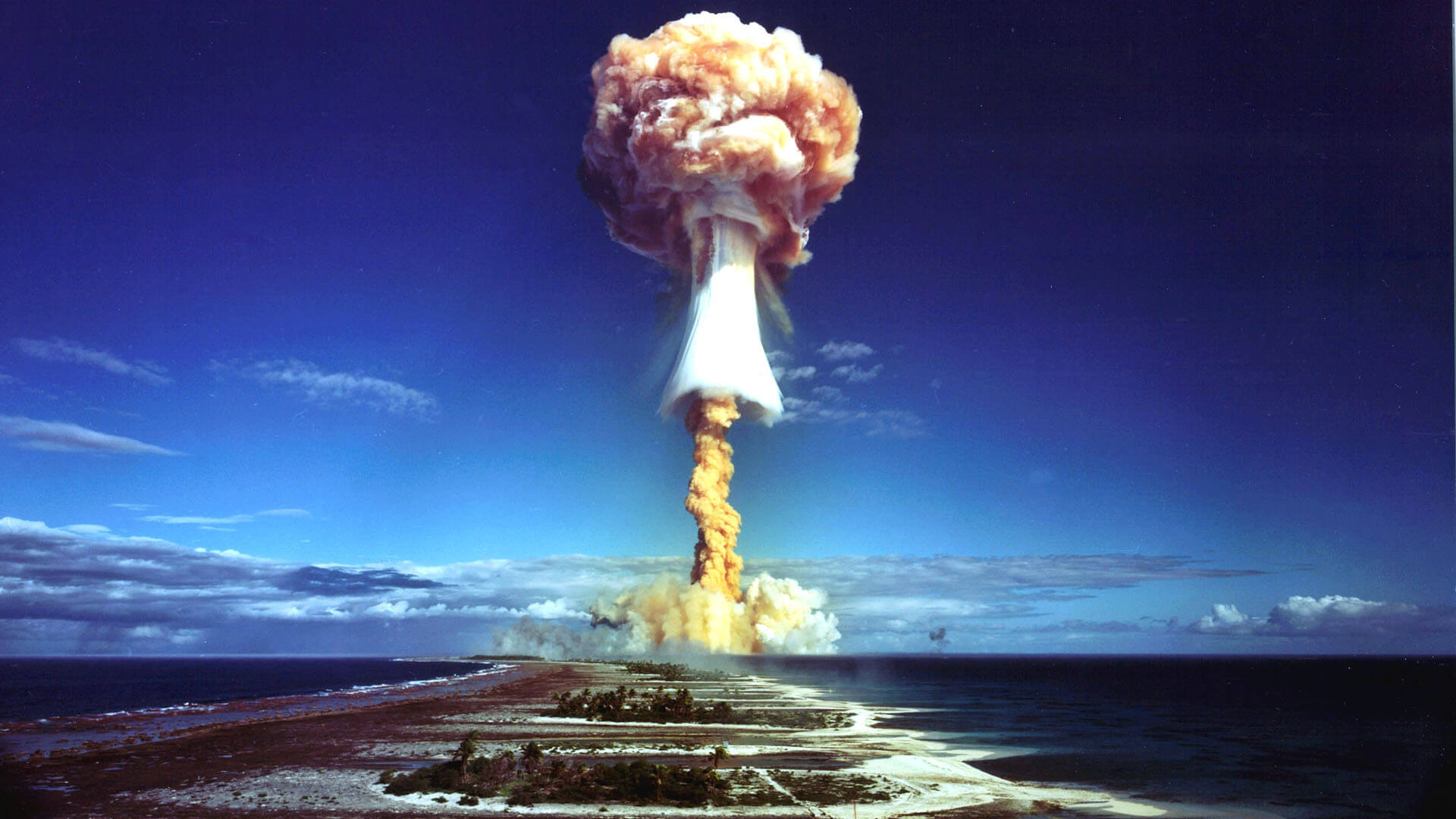 The U.S. government’s nuclear testing at Bikini Atoll in the Marshall Islands began in 1946, right after the conclusion of World War II. The 100-plus indigenous people living on Bikini Atoll at the time were moved to other islands in order to enable nuclear testing to begin.

Between 1946 and 1958, there were 23 nuclear devices detonated at various spots on, within, above, or beneath Bikini Atoll.

Operation Crossroads was an attempt to better understand the effect of atomic weapons on naval targets.

The first atomic bomb to be detonated in Operation Crossroads was code-named Able, and it was a plutonium bomb that exploded in the air over 80 unmanned target vessels in the Bikini Atoll lagoon on July 1, 1946. Able was part of a series of nuclear tests conducted that summer.

Baker, the next test, was detonated underwater and managed to displace tons of water that damaged 74 unmanned target ships. However, it released a radioactive mist that threatened to harm U.S. personnel working to decontaminate the area.

The third detonation in the Crossroads series was canceled due to concern over radiation fallout from Baker.

While both Able and Baker involved unmanned target ships, some vessels were loaded with live animals. Hundreds of animals, including pigs, goats, and rats, were used to test the effects of nuclear bombs on animals.

Able and Baker were the last nuclear weapons tests conducted by the Manhattan Project.


Operation Castle involved testing the first hydrogen, or thermonuclear, bomb detonated by the U.S. It was also the largest nuclear device ever exploded by the U.S. government.

Code-named Bravo, the bomb was a thousand times more powerful than the atomic bombs used on the Japanese cities of Hiroshima and Nagasaki to end World War II. Bravo was dropped in the northwest corner of Bikini Atoll on March 1, 1954.

It exploded on the reef’s surface, blasting a crater a mile wide and 200 feet deep, replacing the coral reef and islands that were there.

Radioactive fallout traveled some 125 miles east of Bikini Atoll, reaching Rongelap, another atoll in the Marshall Islands. People living on Rongelap quickly displayed signs of radiation exposure, and Bravo is known for creating one of the most significant instances of radioactive contamination in U.S. history.


It is estimated that 10,000+ military and civilian personnel (defense department and AEC employees) were involved in the Operation Redwing nuclear tests. Detonations of the Lacrosse and Cherokee bombs were observed from the Navy command ship, the USS Mount McKinley. Among those viewing the explosions were a dozen or so reporters, the first civilians without a security clearance to do so in 10 years.

Operation Dominic was a series of nuclear tests conducted in 1962 in the Pacific. It was one of the geographically largest operations, covering more than 15 million square miles. It was also the last set of atmospheric tests performed by the U.S.

See the list of U.S. nuclear operations, including bomb names, dates, location, and which ships participated.

Were you or a close relative involved in the atmospheric nuclear testing on Bikini Atoll or Enewetak Atoll in the Marshall Islands between 1946 and 1958? If so, call the National Cancer Benefits Center at (800) 414-4328 or use our request for more information form to find out if you’re entitled to compensation from the U.S. government.